This was testimony provided last night during the first “Democracy Day” in Brecksville, stipulated as part of their citizens initiative passed by voters last November. The community forum lasted 4 hours. Dozens of people testified. Pictures of the event are HERE

Good evening. My name is Greg Coleridge. I’m the director of the Northeast Ohio American Friends Service Committee and Coordinator of Move to Amend Ohio. Both groups have Brecksville supporters concerned about the issues explored tonight.

I want to thank Brecksville citizens who in November voted to  “keep democracy alive by voting YES on issue 25.”

Sadly, a growing number of Americans, including those in Brecksville, feel what’s left of our democracy is in peril.

People who believe our country isn’t broken, but fixed…as in rigged…to benefit the super rich, corporations, and/or unions.

People who believe that We the People is more myth than reality.

Your prophetic law calls on the city to ask Congress to pass a constitutional amendment declaring that only human beings, not corporations, possess inalienable constitutional rights and that political money is not equivalent to political speech. Corporations here includes for-profit, not-for-profit and union entities.

Inalienable constitutional rights were intended by our nation’s founders to apply solely to human beings. Corporations are government creations. They were originally subordinate to We the People. They didn’t possess constitutional rights, only publicly granted protections and privileges.

Since corporations are our creations, we have the democratic duty to set their limits. This constitutional amendment would reassert our original democratic authority to define corporate political boundaries – through the democratic process of councils, assemblies and congresses.

Nor is money speech – the second part of the proposed constitutional amendment. If money is speech, then those who have the most money have the most speech. That’s not a definition of democracy, but of plutocracy – a pretty accurate description of our current political condition.

Money from corporations and the wealthy few harms democracy and the citizens of Brecksville in 5 ways:

First, it limits viable candidates. Individuals with good ideas, significant experiences, and/or strong personal integrity who desire to run for public office to represent Brecksville residents are deterred if they don’t have money or unable to raise the money it takes to be viable.

Second, it distorts political agendas. The requirement to attract major dollars to be viable means candidates will only address issues major political contributors or investors approve. This means Brecksville voters didn’t hear the positions of federal candidates last November on a host of issues. It also means those without money in Brecksville and elsewhere have a tough time having their political views heard.

Third, it corrupts public policy. “The best return on assets is always a political contribution,” says economist William Black. This includes actual financial benefits (such as tax cuts for the wealthy or bailing out Wall Street banks). It includes laws shielding certain people (such as incompetent union employees). And it includes what government actions are not taken (such as criminal prosecutions of Wall Street bankers for the financial collapse) – all of which affects citizens here. The political pay-to-play system of legalized bribery results in higher taxes for most citizens, less competition, more inefficiencies, and encouragement of those who profit from their political investments to politically invest even more.

Fourth, it distorts political news. As more political money is raised, more is spent. Much of it is on media advertising, which is very profitable. News organizations have less incentive to provide real news coverage of elections to citizens in Brecksville and elsewhere if they know huge dollars will be spent on their stations for Super PAC-funded one-sided ads.

Finally, big money from the wealthy and corporations furthers depoliticalization. Has an explosion in political money resulted in an explosion of participatory democracy? No. People are turned off by the increasing negativity of political messages, the evolution of elections into political spectator events, and the inability of citizens to meaningfully engage in public policy formation.

Brecksville has taken a powerful stand in support of a real democratic fix to our broken and rigged political system.

Here’s the Amendment. It was introduced today.

WE THE PEOPLE AMENDMENT

Section 1. [Artificial Entities Such as Corporations Do Not Have Constitutional Rights]

The rights protected by the Constitution of the United States are the rights of natural persons only.

Artificial entities established by the laws of any State, the United States, or any foreign state shall have no rights under this Constitution and are subject to regulation by the People, through Federal, State, or local law.

The privileges of artificial entities shall be determined by the People, through Federal, State, or local law, and shall not be construed to be inherent or inalienable.

Section 2. [Money is Not Free Speech]

Federal, State, and local government shall regulate, limit, or prohibit contributions and expenditures, including a candidate’s own contributions and expenditures, to ensure that all citizens, regardless of their economic status, have access to the political process, and that no person gains, as a result of their money, substantially more access or ability to influence in any way the election of any candidate for public office or any ballot measure.

Federal, State, and local government shall require that any permissible contributions and expenditures be publicly disclosed.

The judiciary shall not construe the spending of money to influence elections to be speech under the First Amendment. 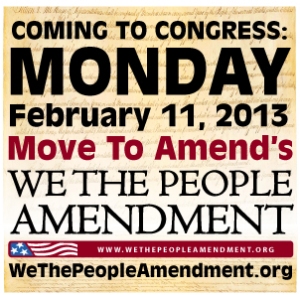