We summarize last week’s activities; announce upcoming events for next week; and comment on increased campaign contributions (or investments) to this year’s federal and state elections; updated wage and wealth gaps; the acknowledgement by a leading global financial figure that banks creating money is a “pact with the devll;” how Parliament in the UK may soon debate how money is created; and, given today is Halloween, a few possible answers to the question “What Scares You About Corporate Rule?” 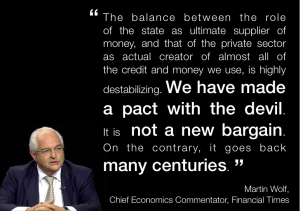 Opposition to the corporatization of money creation is going mainstream — at least in the United Kingdom.

When the chief financial writer of the equivalent of the Wall Street Journal in the UK equates private (banking) money creation to the devil, the power elite banking corporations must be worried. The gig is about to be up. The secrecy, complexity and legitimacy of banking corporations creating money out of thin air to benefit, well, other banking corporations and the 1% is headed for widespread public opposition.

It’s also a huge and growing threat to wait remains of political self-governance by those who don’t own or lead banking corporations.

Wolf isn’t the only prominent Brit calling for rethinking of private/corporate money creation.

Ten days ago Steve Baker, a member of the British Parliament, requested a public debate in the Chamber for “Money Creation and Society.”

The last time there was a significant debate on the creation of money in Parliament: 1844.

“I believe that this is a problem that is absolutely at the heart of our society and what is wrong with our economy. The organisation Positive Money has helped me to campaign on this issue… I want it to be on money creation and society to flesh out both the problem and the range of possible solutions,” Baker said.

Time to expand Wolf’s interest in and Baker’s commitment to debate this topic in our country.

These from Move to Amend… 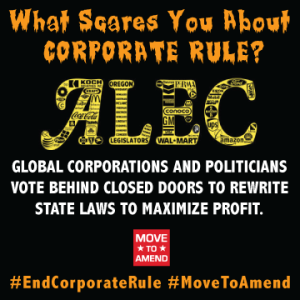 That’s the core message from this article, http://www.theautomaticearth.com/wealth-inequality-is-not-a-problem-its-a-symptom/

“[I]t’s not wealth that floats and concentrates increasingly from the bottom to the top, it’s power. Wealth comes after that. And one shouldn’t confuse that order. Because power buys wealth infinitely faster than wealth buys power.”

Concentration of political power permits those with that power to establish laws, statutes, regulations, even constitutions, that insulates them, widens their political power and rights and expands their income and wealth.

Working to reduce income inequality or wealth inequality is, therefore, futile unless it addresses the gap between the political power haves and have nots — political inequality.

Corporate constitutional rights is one form of extreme political inequality and profoundly contributes to widening economic inequality. The ability of corporations to spend virtually unlimited sums of money lobbying elected officials and regulators, as well as influencing elections via advertising skews public policy in their favor — which includes enormous economic privileges.

It’s why centralizing leveling the political playing field by abolishing corporate constitutional rights (corporate “personhood”), as well as political money defined as political speech, is to vital to not only political equality, but economic equality.

1945 – BIRTH OF LULA DE SILVA, FORMER PRESIDENT OF BRAZIL (2003-2010)
“The Third World War has already started. The war is tearing down Brazil, Latin America, and practically all the Third World. Instead of soldiers dying, there are children. It is a war over the Third World debt, one which has as its main weapon, interest, a weapon more deadly than the atom bomb, more shattering than a laser beam.”

1704 – DEATH OF JOHN LOCKE, ENGLISH PHILOSOPHER
“Observe well these rules: It is a very common mistake to say that money is a commodity…Bullion is valued by its weight…money is valued by its stamp.”

1897 – DEATH OF HENRY GEORGE, AUTHOR OF “POVERTY AND PROGRESS,” POLITICIAN AND ECONOMIST
“On the other hand it is the business of government to issue money. This is why the issuance of this money should be made a government function become still stronger. The evils entailed by wildcat banking in the United States are too well remembered to need reference. The loss and inconvenience, the swindling and corruption that flowed from the assumption by each State of the Union of the power to license banks of issue ended with the war, and no one would now go back to them. Yet instead of doing what every public consideration impels us to, and assuming wholly and fully as the exclusive function of the General Government the power to issue money, the private interests of bankers have, up to this, compelled us to the use of a hybrid currency, of which a large part, though guaranteed by the General Government, is issued and made profitable to corporations. The legitimate business of banking – the safekeeping and loaning of money, and the making and exchange of credits, is properly left to individuals and associations; but by leaving to them, even in part and under restrictions and guarantees, the issuance of money, the people of the United States suffer an annual loss of millions of dollars, and sensible increase the influences which exert a corrupting effect upon their government.”

1929 – US STOCK MARKET CRASH
Known as “Black Tuesday,” October 29 was the worst day in stock market history. Since everyone was selling and no one was buying, stock prices collapsed. The crash was due to policies of the Federal Reserve, which had made money cheap to borrow. Too much money was concentrated in too few hands. Cheap money resulted in wild speculation (booms or bubbles) in financial instruments, the stock market and office buildings rather than useful and necessary goods and services. Speculation was rampant. Understanding what was happening, but not admitting it to the public, the Fed significantly contracted the US money supply by raising interest rates to borrow money. Not enough money was available to meet economic needs. The speculative bubbles burst, triggering what became the Great Depression.

1735 – BIRTH OF JOHN ADAMS, 2ND PRESIDENT OF THE UNITED STATES
“There are two ways to conquer and enslave a nation.  One is by the sword, the other is by debt.”
“All the perplexities, confusion and distress in America arise, not from the defects of the Constitution or confederation, not from the want of honor or virtues, so much as from the downright ignorance of the nation, of coin, credit and circulation.”

1840 – BIRTH OF WILLIAM GRAHAM SUMNER, PROFESSOR, YALE UNIVERSITY AND MONETARY THEORIST
“For as the currency question is of first importance and we cannot solve it or escape it by ignoring it.  We have got to face it and the best way to begin is not by wrangling about speculative opinions as to untried schemes but to go back to history and try to get hold of some firmly established principles.”

1874 – PUBLICATION OF OCTOBER ISSUE OF INDUSTRIAL AGE MAGAZINE
“The religious press has almost without exception been the allies of the bondholders and bankers in their endless schemes to fleece the public, and the mouthpiece of the monopolists and the defender of the soulless corporations that fill their pockets by robbing the toiling people.”

1972 – DEATH OF EZRA POUND, US POET AND CRITIC
Some of his poetry deals with the destructive moral and social effects of usury, or usura, such as his Canto XLV:
“…Usura rusteth the chisel
It rusteth the craft and the craftsman
It gnaweth the thread in the loom
None learneth to weave gold in her pattern;…”

1832 – RE-ELECTION OF ANDREW JACKSON, 7TH PRESIDENT OF THE UNITED STATES
This was the first presidential election focused on the issue of money creation. Jackson was opposed to re-chartering the private Second National Bank of the United States (misnamed to give the impression it was public by calling it “National” in much the same way the current largely private Federal Reserve System is misnamed). A few Jackson quotes:
“The bold effort the present (central) bank had made to control the government … are but premonitions of the fate that await the American people should they be deluded into a perpetuation of this institution or the establishment of another like it.” “If Congress has the right under the Constitution to issue paper money, it was given to be used by themselves, not to be delegated to individuals or corporations.” “I have no hesitation to say if they can re-charter the bank, with this hydra of corruption, they will rule the nation and its charter will be perpetual and its corrupting influence destroy the liberty of our country.”

Why this calendar? Many people have questions about the root causes of our economic problems. Some questions involve money, banks and debt. How is money created? Why do banks control its quantity? How has the money system been used to liberate (not often) and oppress (most often) us? And how can the money system be “democratized” to rebuild our economy and society, create jobs and reduce debt? Our goal is to inform, intrigue and inspire through bite size weekly postings listing important events and quotes from prominent individuals (both past and present) on money, banking and how the money system can help people and the planet. We hope the sharing of bits of buried history will illuminate monetary and banking issues and empower you with others to create real economic and political justice. This calendar is a project of the Northeast Ohio American Friends Service Committee. Adele Looney, Phyllis Titus, Donna Schall, Leah Davis, Alice Francini, Deb Jose and Greg Coleridge helped in its development. Please forward this to others and encourage them to subscribe. To subscribe/unsubscribe or to comment on any entry, contact monetarycalendar@yahoo.com

Matt Wuerker must have certainly been thinking about Ohio… 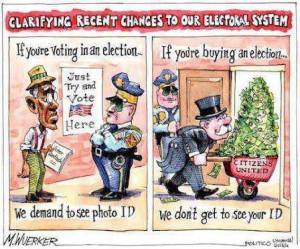 We summarize last week’s activities; announce upcoming events for next week; and comment on NAFTA and other corporate so-called “trade agreements” caused migration from Mexico; EBOLA vs economic fears; how the federal reserve purposely attacks savers; a new study documenting the richest 1% owning 50% of the world’s wealth; how wealth inequality is a symptom of political inequality; and if money = speech, does that also mean speech = money.